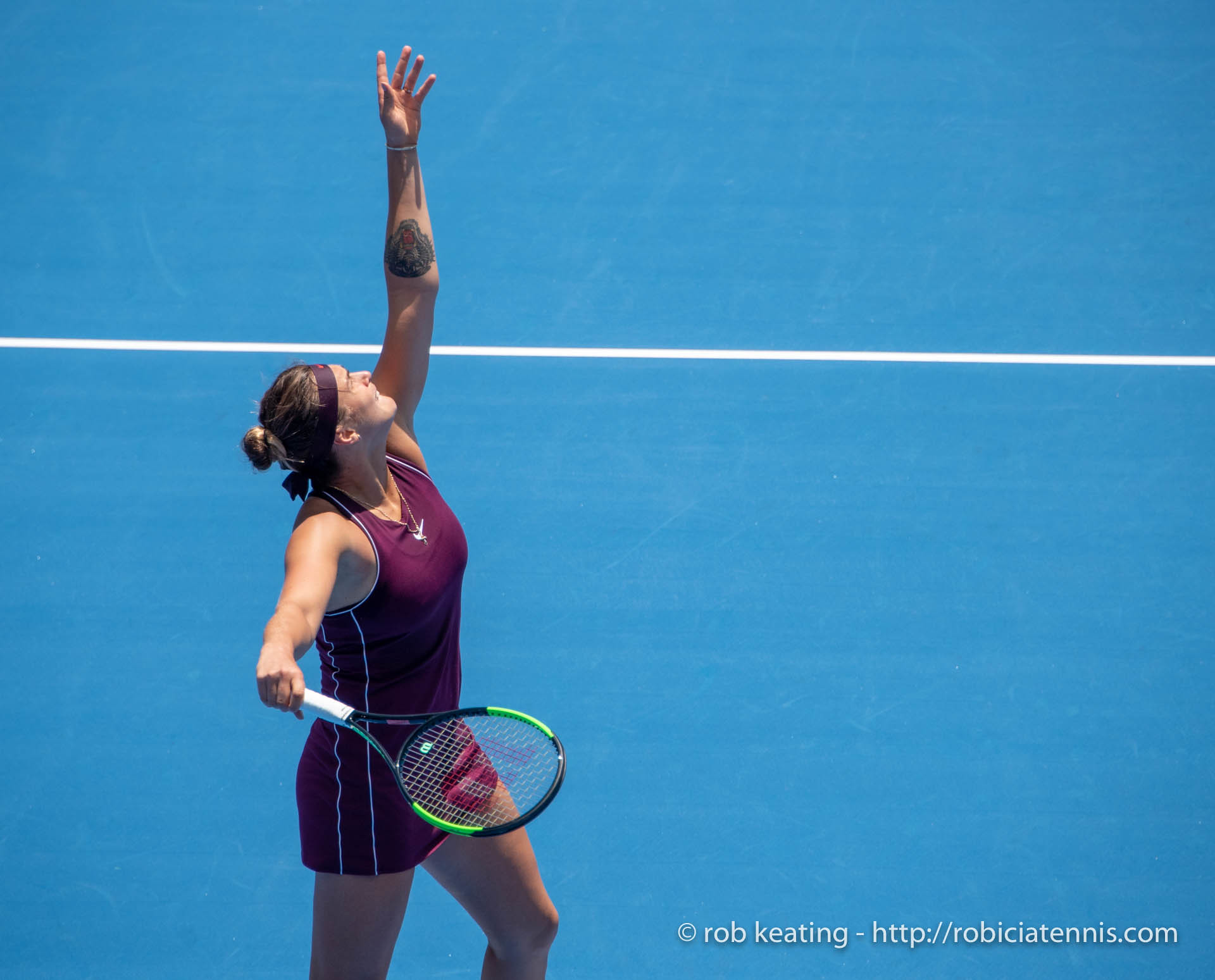 Aryna Sabalenka will go head-to-head with doubles partner Elise Mertens in the final at Linz.

Fresh off her singles win at the J&T Bank Open in Ostrava, Aryna Sabalenka secured her place in the finals at the Austrian Open, after holding out to beat the unseeded Barbora Krejcikova 7-5 4-6 6-3.

Sabalenka will now face off against her doubles partner, Elise Mertens, in the finals at Linz after the pair also won the doubles title at the J&T Bank Open in Ostrava 3 weeks ago.

Her semi-finals win against Krejcikova also saw the world No.11 knock Serena Williams, out of the WTA top 10, with the Belarusian climbing the rankings to secure her first ever year-end top 10 finish. She toasted to her success after the match with a cake!

No.1 seed Sabalenka hadn’t dropped a single set on her route to the semi-finals and was looking to cap off her season with a clean sweep after she brushed past Jasmine Paolini, Stefanie Vögele, and Óceane Dodin to reach the semis.

But world No.74, Krejcikova, wasn’t going to let Sabalenka have it all her way, asking questions of the Belarusian and disrupted her rhythm converting 3 out of 5 breakpoints and saving 11 out of 15 breakpoints during the match.

“It wasn’t an easy match for me,” Sabalenka conceded in her post match press conference. “She (Krejcikova) played really well. I didn’t play my best, but I tried my best, so I’m happy I could handle this game and win it.”

It made for a great contest as both players struggled to separate themselves from one and other, with the match going the distance taking 2 hours and 6 minutes to complete.

Sabalenka took the lead early, but the Czech quickly drew level, playing some well timed ground shots to ensure her opponent didn’t slip out of her reach.

At 5-5 Sabalenka turned up the heat and broke the Czech’s serve, to take the 7th and final game of the set after almost an hour on the court.

Sabalenka kept her foot on the gas at the start of the second set, winning the first two games and showed off her precision, slicing the ball over the net to go 2-1 up.

But the Czech came back to break Sabalenka in the third game, pushing her deep into her half of the court and dispatching her opponent with a killer drop shot that died before Sabalenka could reach it.

Despite Sabalenka’s resulting advances, Krejcikova came back to close out the set, breaking her opponent’s serve to win 3 games on the bounce.

Pressure mounted in the deciding set as Sabalenka again pushed early to take the lead, with Krejcikova continuing to pull level with the Belarusian.

As both players saved break points to bring the set to 3 games apiece, Krejcikova hung on as Sabalenka continued to ramp up the pressure as she looked close out the match.

At 4-3 Krejcikova galliantly came back from going down 40-0 to put a hold on the Belarusian’s advances, although Sabalenka’s ruthless precision got the better of the Czech, breaking her service to win the game.

Sabalenka served out the final game to win a trio of games, secure the match, and take her place in the finals, where she’ll face off against her doubles partner Elise Mertens on Sunday.

“At the beginning of this tournament, I said it would be very cool to play Elise in the final, and now here we are. It’s a great thing, and she’s a great player,” Sabalenka said smiling after the match.

“Every match we’ve played before has been at a great level and big fight, so I’m really looking forward to it.”

With both players looking to end the season on a high, it should be an electric finish to what has been a fantastic tournament in Linz this year.